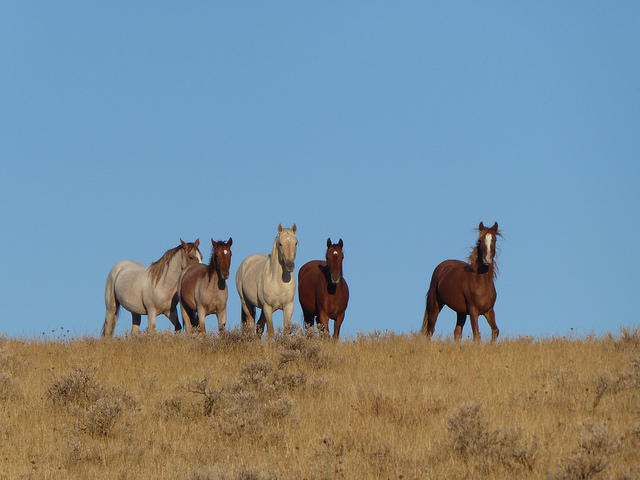 They captivate people around the world. Mustangs are feral horses brought to the US by settlers. Earlier, countless of them moved through the prairies. They are the epitome of freedom. They were born in freedom, an american mustang is not bred. Still, many of them are captured, registered and sold. The horses live freely on provided government land. But there are more animals than the country tolerates. The grazing areas are not enough for so many horses.

Even earlier, farmers with their herds of cattle were on the same grazing grounds as the Mustangs. Many were shot. In 1971 there were only about 25,000 wild horses left.

They have been put under protection and since then, the Bureau of Land Management cares about the preservation of wild horses. They can not be killed anymore. Today, there are just over 80,000 Mustangs. Too many for the land available to them. Chronic overpopulation increases the risk of damage to rangeland resources through overgrazing, and the chances of starvation and thirst for animals in overpopulated herds, said BLM.

That’s why animals are being caught again and again. Selected Mustangs may be adopted. You can get an animal like that and take it home with you. A challenge, but also a worthwhile thing. Because Mustangs are considered to be open, intelligent, adaptable and faithful in addition to their noble appearance. Despite their wild origins, they are very human-related, learn quickly and willingly – all in all an excellent partner. But it’s also a chance to cultivate and own some of America’s heritage. You don’t necessarily have to be an American to do that, either.

“When you adopt a wild horse or burro from the BLM, the animal will need to reside within the United States for at least 12 months until you have received title of ownership to the horse”, explains BLM spokesman Jason Lutterman. “This is because the horse must be available for inspection by the BLM within that 12 month period, and we do not operate offices outside the United States for that purpose.”

In the US, too few of them are adopted. The cost of supplying the unmediated horses is increasing. That’s why the US government has taken a special action and is now paying anyone who adopts a wild horse $ 1,000. However, prospective owners must demonstrate that they can provide the animals and commit to comply with a number of legal requirements.

To provide a Mustang with enough space and what it needs, that costs money. That is why there is now this financial support. “We understand that adopting a wild horse or burro represents a commitment. The incentive is designed to help with the adopter’s initial training and humane care,” said BLM Deputy Director of Programs and Policy Brian Steed.

Since 1971, 240,000 wild horses and wild burros have come into private hands. Many of them have become excellent western, show or workhorses. Many of them, above all, friends for life.

The Bureau of Land Management has released a film about the history of protected American wild horses and wild burros.